It was twenty-three years ago when the first Caribbean Multi-National Business Conference was organized by CARIB NEWS and held at the Braco Resort in Trelawny, Jamaica.

The idea grew out of an awareness that there needed to be a firm connection between the vast potential of resourceful and enterprising business –persons in the larger diaspora of African-Americans and the opportunities in the Caribbean. There were common bonds and heritage ties that were natural.

It was also clear that the Trade missions organized by Caribbean countries were never directed to the black investor in the United States or elsewhere. A look at Black Enterprise magazine top 100 Business list suggested there are companies with the potential for expansion and there is expertise that the region could benefit from.

Membership in the Greater Harlem Chamber of Commerce brought CARIB NEWS in direct contact with some of the real black entrepreneurs in the New York area. A connection needed to be made. 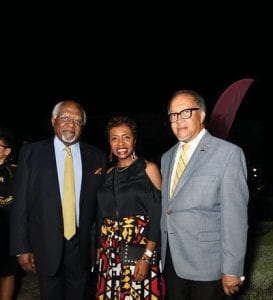 Since CARIB NEWS was founded in 1982, it saw one of its core missions as that of connecting with the larger black community; there was a commonality of purpose and interest.

CARIB NEWS did not want a parochial publication, but one that lifted up the community providing information to broaden the reach and alliances for empowerment.

After all that has been the history of Caribbean-Americans in the struggle for freedom and power, they came together with the African-American counterpart in the “Partnership for Progress” Examples of Marcus Garvey, Prince Hall, Shirley Chisholm, Barry Belafonte, Colin Powell, Basil Paterson, Stokely Carmichael, Malcolm X, all were engaged in Liberation Struggles.

The decision was made; if we CARIB NEWS were going to organize a trip to the Caribbean, it had to have a purpose of connecting businesses in the diaspora and also those companies with a decided interest in the Caribbean to participate. CMBC was never designed to exclude opportunities for major company engagement in the Caribbean, in fact, it encouraged it, but opportunities should be opened to those with common ties also. We were able to organize, in 1995, a Conference of African-American, Caribbean- American, US business persons, US Corporation leaders, thought leaders, and elected officials to come to Jamaica to explore the possibilities. 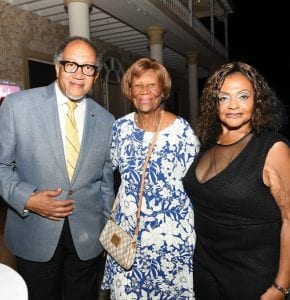 It was an emotional first conference and people bonded immediately, partnerships developed, and a whole new awareness of possibilities evolved.

Hon. Percy Sutton, then one of the most successful black businessmen in the US, was almost in tears as he wondered out aloud, “why was this not happening before”.

Ambassador Andrew Young, international icon, remarked of the joint economic power of the African-American, the Caribbean and Africa, and saw the conference as a start to the Golden Triangle as he called it.

Hon. David Dinkins said his eyes were opened to new possibilities; it was a glorious beginning.

Hon. Gordon “Butch” Stewart transported the entire group to his private villa for an evening of entertainment and dinner. He said, this is the kind of connection the region needs; this was an organic connection that was good for all.

Before we could even conclude this first experience, the Hon. Billie Miller, deputy Prime Minister of Barbados invited the next conference to come to Barbados the next year, CMBC would become a vehicle of connection for the next 23 years.

When CMBC returned to the Braco resort this month for the 23rd Annual Conference, it was more than just nostalgic, it was a recommitment to strengthen the connection, and as the theme suggests – Facing Change: Facing the Future Together.

A lot has been gained in the years, and a lot has been changed. Some of the changes are frightening and can wipe out much that has been gained. The mission of the conference is steadfast, purposeful, and committed. Facing the Future together, unity in action, building alliances, deepening collaboration, expanding partnerships and setting the agenda.

The years have not diminished the energy of CMBC – for three days, people were keenly engaged. The cloud of change did not deter the delegates; they are ready for action, drawing strength from each other, looking at building for the long-term future together.

From the welcoming session, the Thought Leaders laying out the possibilities of “smart solutions”, the problem and innovative approach to the future, the panel of Dr. Julius Garvey, Senator Kevin Parker, Dr. Ben Chavis and Skip Dillard got the conference off in an exciting way.

Hon. P. J. Patterson laid out in a masterful way the change we are facing, and what is needed to work together – it anchored the tone of the conference. Global Education Partnership with Vice-Chancellor Sir Hilary Beckles and President Vincent Boudreau of City College, New York opened a new vision of a Global Academic arena.

Rep. Yvette Clarke, in her keynote address, laid out the possibilities and effort needed to bring about smart solutions and business successes in working together. Rep. Yvette Clarke, Dr. Hazel Dukes, Assemblymember Inez Dickens, Senator Kevin Parker provided an analysis of the recent US election and provided a roadmap to meaningful political action and how to have the system work for us.

The discussion was moderated by Dr. Lloyd Williams.

Ambassador Andrew Young, in his wisdom, reminded the group of the role the conference plays in shaping the agenda for the larger community, that he is refreshed by the discussion and that all must seek and take advantage of connecting with each other. He cited example after example.

A dynamic woman of power and Influence keynote by Hon. Olivia ‘Babsy’ Grange, Minister of Culture, Sport, Gender & Entertainment, with a dynamic panel of Judges, Machelle Sweeting, Hon. Inez Dickens, Bishop Sylveta Gonzales, and Dr. Joan Dawson. Session on Tourism, Culture, Doing Business in the US, Cyber Security, and the future of Cannabis were all well received.

As the Hon. Harry Belafonte said at one of the conferences, the banquet of ideas is spread before us all, it is for each of us to partake of the feast. CMBC 2018 was a banquet of gourmet ideas; people were very focused and energized.

We have to get the light going; we have to keep the ember glowing; in spite of the challenges and difficulties, we can find hope in each other; we can find strength in working together and we can face the future in the confidence of each other. CMBC returning to Braco – mission unchanged, determination in place, progress in sight.